While the highlight of our latest 5.230 release is indeed the Webviewer, we’ve also added another important feature: hotkeys.

We have not announced it widely or enabled it by default as we are still working on some improvements, but many of you have been asking for hotkey support for a long time, so we wanted to give you the opportunity to test it as soon as possible.

You can enable it in the Settings/Preferences menu, under the “Single Key Action” menu item: 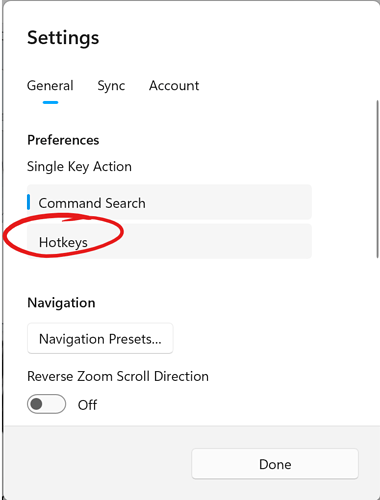 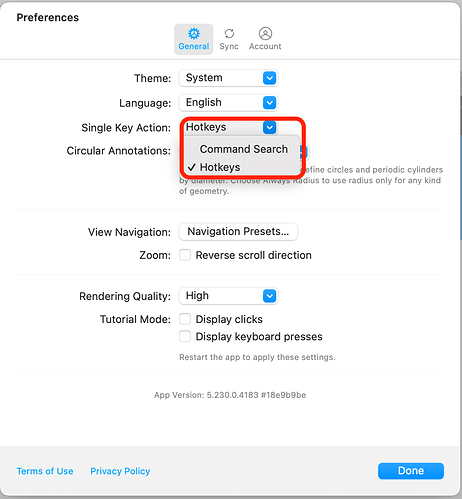 After enabling it, typing single keys wouldn’t start command search as before (though it’s still available after pressing the key “X” or Ctrl/Cmd+F), rather activate tools, sketch pens or constraint settings. The list of shortcuts is available in our manual for Windows, Mac and iPad. You can also see the hotkey assignments when you search for a tool in Command Search, in the application menu on the top of the screen on the Mac and we’ll also provide toolhints in the side menus later on.

Please give it a go and let us know what works fine, what works strange and what’s missing for you!

Very cool. I use a Wacom with Spacemouse pro, and keep my keyboard right there for command search. It’s great, but I’m interested in trying the hotkeys. I have my space mouse buttons programmed, as well as the Wacom, but if I can memorize the keyboard I can hopefully be blazing fast.

Oh yes, I was thinking about reaching out to you specifically, too, that’s quite a special setup you have there that combines so many things we’ve been working on recently. Do play around around with it and let us know how it goes.

@Peter_Gy I’ve finally gotten a chance to try the hotkeys, and the addition of key hints next to the tools was helpful. I’ll be able to learn the shortcuts much easier.
I do like that I can press “X” and still command search, which shows the shortcut key if applicable.

There are some buggy behaviors though.

When selecting a surface to sketch on, the sketch tools show the shortcut hints.
I can press “C” and begin drawing a circle, for example.
Once the circle is completed, the sketch hints disappear.
Leaving the sketch view and reselecting the sketch surface brings back the hints.

Modeling tools however are not showing the shortcut hints. 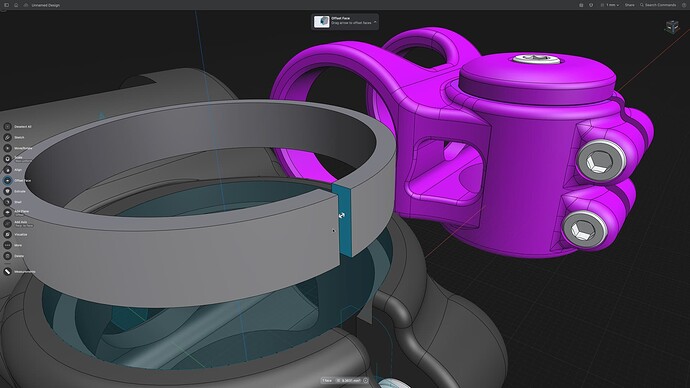 There also seems to be no shortcut for some tools, like Replace Face for example, which I use very frequently.
Will we be able to assign keys for these?

Once the shortcut hints appear normally, I should be able to learn them and speed up my workflow.

Thank you, we are looking into this.

Thanks for the feedback! Just for the record, in this case you’re using a Wacom pen together with the shortcuts, right? Could you try going through the same workflow just with your mouse for the sake of a test? We have logic implemented in the app that disables the toolhints when it detects that it’s being used in tablet mode to make the screen less cluttered for those who wouldn’t be able to use it. But currently that logic is built on checking for pen usage which is not correct when you are using a Wacom – I could also reproduce the same erratic behavior around the toolhints with that setup.

Yes, I’m using a Wacom pen with the shortcuts.
Just checked using my mouse instead and the toolhints stayed visable.
Switched right over to using my Wacom and the tool hints disappeared.

Is this logic for the user input used across MacOS and iOS?

Not to stack your plate, but there’s some similar odd tool button behaviors using my tablet as well, possibly related the same logic for user input.

Using my Wacom pen, I “double left click” to select a sketch surface, and all the tools are shown with the hotkeys. LINE and ARC are displayed as to separate buttons. When I got to select a tool, the two buttons combine and become LINE/ARC and the stack of buttons shift upward and I have to reselect the tool. It will also do this if I immediately begin sketching. It has been doing this for as long as I remember but your explanation of the user input logic makes the behavior make sense now.

I’m hoping that if the solution is to remove tablet logic from MacOS for Wacom input, it fixes the tool hints visability, AND will keep the LINE and Arc tools separated, which would be a “two birds one stone” fix.

Yes, you are absolutely correct, it’s the very same logic that gets applied there. We do that on all platforms.

But that’s a harder one. While the behavior above is confusing and should be fixed, I am not sure we’d want to change how the Line & Arc tools behave: the idea is that when you are using a pen, a shared line/arc tool is simply better: you can just start sketching and depending on how you draw your pencil you get the right shape. That should apply to Wacom as well. Would you also want to use the explicit, separate line and arc tools?