Since we’re discussing materials and lighting, I have been brought back to my lighting engineer days. Don’t worry, I’m not going to brag.
There’s a little something I want to share. Most of you have seen such tools before, but since Visualization is there, it’s finally like the real thing!
My favorite shadow and light measuring tool was, and is still a 7-millennia old one (perhaps older) object. 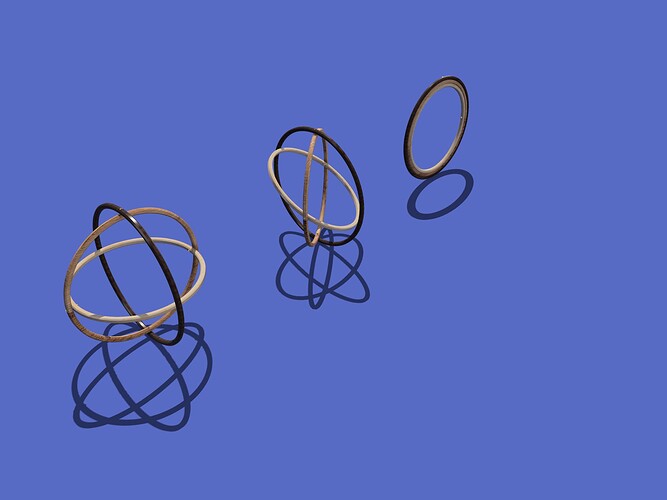 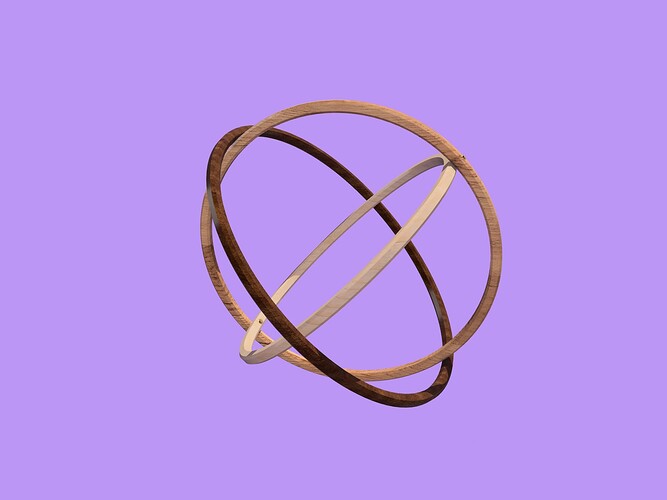 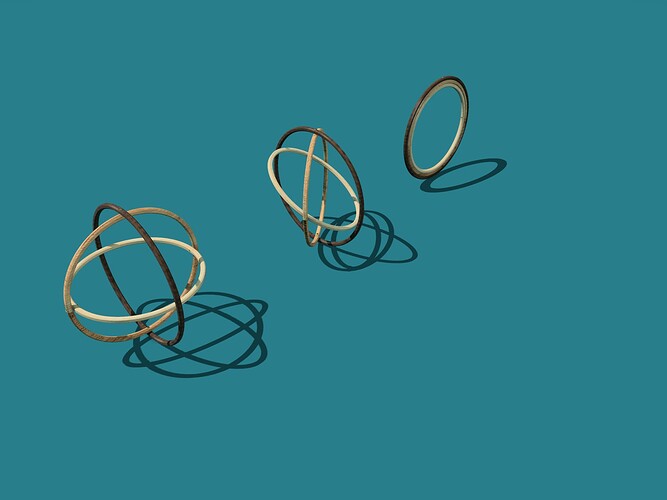 Light orbs are pretty straightforward in the way they are made, but layers of meanings have been buried as time passed.

Light orbs symbolize the concept of “wholeness of the universe”, represent then-perfection ideals in their mimicking of a sphere being a reference to the sun (it’s ancient Egypt I’m talking about, after all), bring together three dimensions each being embodied by a circle, thus mimicking Cartesian XYZ… and much more since countless uses and modifications are easily made. For instance, other objects can be mounted on light orb rings, such as light-blocking (or variously opaque) semicircles or/and hemispheres…
Beauty often lies in simplicity.
There’s nothing exceptional about light orbs, minus the timelessness of such tools. About every motorized spotlight-hanger seen onstage still retain the structure of the light orb. Three circles can be found as squares, but the interaction between the outer, median and inner circles (or squares) remain.
So, why am I writing such a long blurb?
The striking contrast between the over-simplicity of a light orb and Shapr3D’s beyond-now-technology is, to me at least, truly awe-inspiring, and brings back ancient memories to life. It’s going to be fun, reviving extremely ancient artifacts like those.
Thanks to your commitment, dedication and hard work, long forgotten
tools, concepts and ideals can take shape in a most gorgeous and poetic way. Fantastic!

It was so easy and fun, I couldn’t resist. It’s actually very basic. Sketch a circle, offset it, and offset it again. Next, extrude, chamfer and add hinges.

Those three orbs are copies of the rightmost one, but each circle has been rotated in a different way. Quite a nice refresher for rotating, moving and so on.

Materials are perfect, yet the wood grain is not realistic enough (not set up with a natural angle), but it’s quite a nice thing though.

If anyone is interested, I can develop. Leonardo da Vinci used to tightly wrap fabric around orbs, and was unknowingly using UDT (Universal Deformation Technology)… Hahaha!

Orbs are spherical, but once their circles (forgot to mention that the outer one behaves as a bracket mount. It’s set for good and serves as a stabilizer) are moved, if cloth/fabric/tight elastic rubber is put on, they become like “squishy spheres” and can take about any sphere-like shape, or elliptical/ellipsoid-like shape. Same goes with modern (offset squares) versions.

To think that 7000 years old tools are still used… it’s incredible. Isn’t it?