Am i missing something with rotating a model

Sometimes i get confused trying to position a model for either working on it or maybe posing it for screen captures.
In a normal position, both horizontal and vertical movements with your finger represent movements on screen, but if you rotate the model 90 degrees it doesn’t.
Does this confuse others as well, why does it do this? I can remember if this happened when i used other cad software?

I haven’t really used 2 finger rotation too much, but I see what you mean. Once you rotate it, it feels like the axis of rotation is constrained to one axis.

It’s designed like that assuming you want your part to be in a z up orientation. If you go to the settings and change the grid position from XY to YZ or ZX it will change how you pan around the model.

That still doesn’t make sense to me because if you switch the axis then the same anomaly will happen on that one. So what would be a simple rotation with your fingers you have to switch axis often then. When if it simply followed what you did with your fingers, you would get a model rotated the way you wanted.
Just seems counter intuitive when a touch device does a move opposite to what you would expect and against what you are inputting with your fingers

You can turn on 2 finger rotation and that will give you greater ability you rotate around your model.
I see what they are going for constraining the view point to a single axis. I’ve found I prefer the model a certain way by how it was designed or imported and I just orient the model in a way that makes the most sense for how the software works.

Hey, this is indeed not the right behavior. We will look into this, thanks for reporting it!

“2-Finger Rotation” in the settings app. 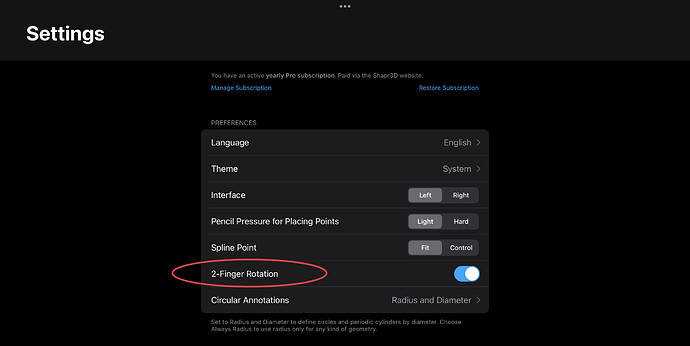