It is difficult to describe exactly what I am strugging with so I have uploaded a video to YouTube wwhich I hope makes it a bit clearer.
In the video I can rotate the model ok by moving my finger up and down but when I move it side to side the model does not behave in the same way.

Can anyone explain to me just what I am missing? Thanks

Link to the video here

Chris, I have no issue rotating in any direction. It matters where you grab it. Perhaps you have a bad installation? Something is clearly off with either the installation, or your iPad.
Go to your settings, Shapr3D, and turn on “Display Pencil and Touches”. Then send us another video. This will show us where you are touching.

Hi @chrismower, you may want to try to turn on “two finger rotation” in the camera settings under the top right button. Can you please try it? Let me know if that helped.

Thanks for the reply. here is the link -

tried that and it has no effect. I posted another video as per McD request which shows my finger movements.

Chris, I think Istvan has a good point.

Chris, Ok, thank you for your updated video. I’m trying to send you a video of how it works on mine, but the video is too large.

I assume that I am correct in my expectation that rotation around each of the axes should be intuitive with one finger up down motion rotating the image around the horizontal axis and left-right motion turning the model around the vertical axis while two fingers cane spin the model. Is this correct? In which case why is my program doing it differently.
I am running 3.38.0

Chris, this is how easy it works normally. 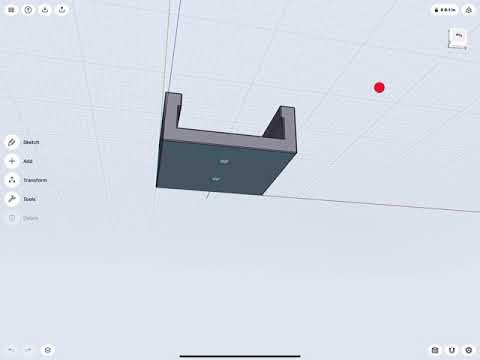 Chris, yes. You are correct. It’s been that way from essentially the beginning. The version shouldn’t matter. I’m also running 3.38.0. Let’s let Shapr3D have some time to reply further. If you don’t have a lot of design work, you could delete, and reinstall the app. If you do have have design work, save it to an iCloud folder, so you wouldn’t lose any files.

So in fact it doesn’t actually work in an intuitive way as I was expecting. I find it rather chaotic having it spin when moving right to left yet turning over when moving up or down.
Surely this can’t be correct?

Chris, well, if you mean exactly around each axis, it does depend where you grab it. But you can quickly flip it using the upper cube.

I am not entirely sure if I understand the issue correctly. This is how camera transitions work in other CAD systems as well, like Fusion360, where the axis of the camera orbit is fixed. As you are transitioning to the left/right directions, the camera’s up vector (the vector that defines the up direction of the cam) has to change accordingly, so when you finish the transition, the cam’s up vector and the axis of the orbit are consistent. Does this make sense?

I am just starting to get to grips with Shapr3D and in my opinion is an outstanding program which makes it very easy to create even very complex designs. Having come from Fusion360 I was expecting a steep learning curve for a new program but in fact it was nothing of the sort. However I have to say that although the difficult stuff it does with ease it falls down on some of the very basic stuff.

Simple things such as drag select for multiple objects rather than having to tap on each and every one individually. There is also no Select Mode where the pencil acts just as a selector rather than defaulting to line drawing. I find that frequently I have gone to make a movement of say a line and found that I have missed and now drawn a line instead. Drawing programs usually have the old arrow symbol which represents the select tool.

There are many other things which have thrown me and they are all the simple things: the complex on the other hand seem to be easy to comprehend and use. I am in the first week of my trial and I need to decide whether to continue with the rental. I most probably will but there are times at the moment when I find myself annoyed by something very basic just not working.

Just my two-cents, as i said an outstandingly capable program but quirky in ways that it really shouldn’t be.

I understand what you’re saying and I agree that it is similar in Fusion 360. It’s just that it seems wrong when you are using a tablet and have the object under your fingers for it to behave in what seems a weird way.

p.s.
As a retired engineer/programmer who used to specialise in GUI design it could be that my ideas of how an interface should work are why I find these things frustrating.

Got it. It’s great to have feedback on this, thanks. What would you expect? What would feel more natural?

For me, and I realise that others might differ, I think that on a tablet it should respond as if you are actually holding it. Perhaps a mode switch between say Natural and Original movement and people could then choose. Does that make sense?

We had the “natural” for a long time. People constantly complained about it, and lost the orientation

the problem with the natural movement is that by definition the orbit axis will change (perceived “gravity direction”) that will make people loose their spatial orientation. Although this could be a setting of course… but it’s really just that the transition feels awkward, but once the transition is over it feels natural, isn’t it?

I’m sure you’re right and I suppose that I will just have to get used to it, bearing in mind that I actually purchased my iPad Pro solely to be able to use Shapr3D, so I have quite a lot invested in the program already. And as I say the complex it does with ease, it’s just the simple stuff that makes me curse and swear!

We are trying really hard to live up to the expectations, and releasing new and better versions every two weeks. A list of the most frustrating things you have experienced could help us tremendously going in the right direction.