2 tools that are very similar:
A: In sketch mode project lines from any part of a model to, and normal to, the sketch plane. This enables the creation of aligned sketch geometry from other parts of a model.
B: “Pull Up To” This tool pulls a face up to a point, a line, another surface making the pulled surface co incident with the pulled too surface, or a plane, again making the pulled surface co incident with the plane. The only method I have found so far to achieve this is to pull the surface past the target surface or plane, then using split object and deleting the surplus object.
Where the surface being pulled is part of the same solid as the pull up to surface, the 2 surfaces become fully co incident and any surface boundary lines disappear thereby facilitating subsequent filleting operations.
A+: another “sketch” tool wish is for a “join two lines” where the lines are usually at an angle to one another so that either or both lines are pulled to a common point and given an intersection signature, and any surplus length is trimmed. Where the lines are co incident, they are extended towards one another and the two lines become one line.

A: In sketch mode project lines from any part of a model to, and normal to, the sketch plane. This enables the creation of aligned sketch geometry from other parts of a model.

Have you tried the Project tool? What do you miss from it if you did?

You can easily achieve this using the Replace face tool, it’s faster than doing it with the Split tool.

A+: another “sketch” tool wish is for a “join two lines” where the lines are usually at an angle to one another so that either or both lines are pulled to a common point and given an intersection signature, and any surplus length is trimmed. Where the lines are co incident, they are extended towards one another and the two lines become one line.

What is your use case for this feature?

Thanks for taking an interest in these needs.
I am not a young high end, switched on, C+ capable modeler/designer. I am a more casual modeler, yet I do a lot of design work. I have used extensively Rhino3D, Solid Edge, ANSYS SpaceClaim (this is my current primary modeling tool), and now Shapr3D, which I will be using increasingly as I live afloat on a sailing boat and Shapr3D is the perfect tool for mobile people who need to communicate design on the go.

SpaceClaim has excellent tools for navigating construction sketches around a model where the need to be able to move a construction plane in all ways is achieved with the standard move tools. Shapr3D can achieve the same with an axis icon which becomes visible in the bottom corner whenever a sketch grid becomes active. Selecting a construction orientation from a face in the model then touching the icon would bring up the move tool to enable better placement of the sketch relative to the model. Then A: 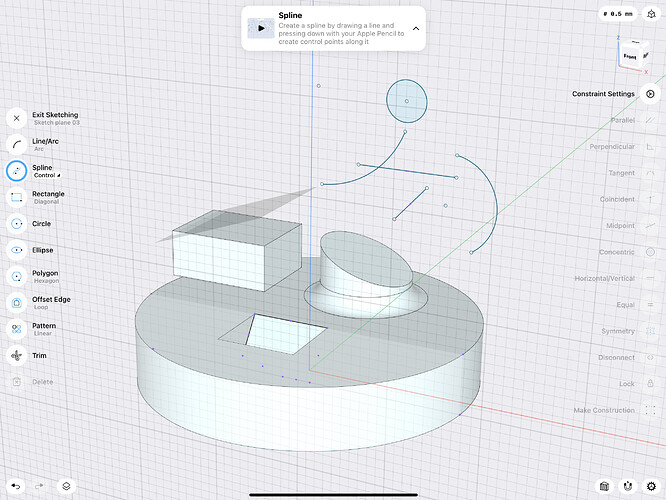 Having created a sketch plane, if I want to pick up the detail of the angle face on the round protrusion, as the system is, if I touch the perimeter of that face the sketch plane disappears. Also, from this window we cannot use the project face tool as it is not in the menu set. If you have a “Project” button in this menu set we would be able to touch lines and surfaces around the model with the button active for those details to be projected normal to the construction plane.
Further more, as we have moved the construction plane away from any features, or the features are change, when modeling in Rhino3D I created a script to place a small selectable surface at the origin of a construction plane so that I could easily re orient to the construction location later on as the model grew. This is actually a CATIA feature that I happily remodeled to work in Rhino. That script created a small plane on a special layer which I could turn on and off with a single click (Rhino allowed the creation of custom buttons in their script functionality). By turning on that layer, all of the saved sketch plane history became visible in the model space to allow a single click construction plane activation with the layer being turned off automatically once the selection was made.

A+: The “Extend/Split/Trim/Join” Tool. This is available in all of Rhino, Solid Edge, and in part in SpaceClaim.
The complete tool would: for the circle and the Arc …if the arc at the end to be extended is double tapped, then the circle is tapped on the far side to indicate how far to extend the line, the arc will extend to that far side crossing, splitting the circle, and joining the arc to both ends of the chords of the circle. One or both of the ends of the circle chords can the be trimmed. If the arc is single tapped then the circle tapped anywhere the arc will be extended to the circle at the first coincident point of the circle.
For the horizontal line crossing the shallow arc, this can be managed with the basic trim tool to good effect. However for the angled line pointing to the horizontal line, double tapping the angled line would extend that line to the horizontal line with no further action. If both lines are single tapped the angled line will be extended and the horizontal line trimmed on the opposite side to the tap point. The junction would get a coincident indication (small circle).
For the 3 line set of two lines and an arc, if I wanted to make a small triangle with one curved face, I would single tap the angled line and the smaller vertical Arc to extend one or both lines to the coincident point with an automatic trim of the extended length and the application of a coincidence indication. However if I didn’t want to trim the lines, I would double tap the angled line with a tap and tapend hold. With the second tap held on the line extends in short bursts till the pen is lifted. This is actually a SolidEdge tool which is really useful. SpaceClaim annoyingly does not have this feature. The other 2 points can be resolved with single taps on the appropriate point on lines to complete the triangle and a surface will be created if all conditions are met.

A++: while I am wishlisting there are some other super useful tools in for one SolidWorks, and that is their Dome tool. This is a tool with 3 options which allows the designer to touch onto a face and pull that face into a dome, and where the touch/pull point becomes the apex of the dome with the option of moving the apex around for non uniform constructions. The 3 options relate to the treatment of the edge of the dome. Option one leaves the angle of the edge normal to its adjoining face to create a bell type curve dome. Option 2 allows the dome curve to be tangent with the junction line. Option 3 creates an elliptical dome with the with the edge of the dome being tangent with the face of the adjoining boundary surface.

The other tool with similar function is for tangency line of curved fillets, where (when active) the tangency line can be pulled to create an elliptical curved fillet. The full functionality would allow for a double tapped tangency line to become a spline with the fillet becoming a NURBs surface. A mirror option would cause that tangency curve to occur on both faces of the solid and where moving the pen in any direction governed the apex of the change.

B: Istvan, I will do a separate email to cover B: as I have a model that exemplifies the problem. I will send the file as a step file with images to highlight the issues.

I love what you are doing with this amazing design tool, I love it. I hope this hasn’t been too long.