I cannot chamfer or fillet the top edge highlighted in blue (or the corresponding bottom edge), even by very small amounts such as 0.1 mm. Every such attempt triggers this error message: “Range of blend on face is too large.” Ridiculous. If I produced that part, I could round that edge with a router bit, forming a perfectly valid object. If Shapr3D functioned correctly, it could also produce a perfectly valid object in this case and the many other similar cases I’ve encountered when producing objects of other shapes.

Clearly, some functionality in Shapr3D is poorly conceived. I don’t have time to list all of its exasperating bugs, but here are three more encountered in this sketch and countless others:

(1) Error messages indicating that deleting a line (etc.) would break a pattern constraint, but there is no visible symbol for me to delete that constraint.

(2) Labels indicating the size of various objects frequently overlap, with the topmost one obscuring one or more below it even when there is loads of space elsewhere on the screen to display that label — say, on the other side of the circle.

(3) Creating an object often results in its size label being positioned off screen (again, even when there is plenty of room on the screen to display that label), forcing me to resize the page to see the label.

BONUS BUG (one of my Shapr3D pet peeves): I often need to position something (say, a circle that will ultimately become a hole) relative to one of the corners of a rectangle, for example. It is most convenient to place the circle at one of the rectangle corners, then move it to the desired spot (say, 10 mm down and 10 mm laterally). However, every time I do that, it moves not only the circle (even if that is the only thing I have selected), but also one or more lines forming the boundary of the rectangle. This is also ridiculous, compelling me to take additional steps (such as creating sizing boxes and moving the circle to one of its corners). Shapr3D should have robust functionality for precisely placing objects relative to a fixed coordinate system or selected objects. CorelDRAW and other programs have that very basic functionality, making it very easy and intuitive to position objects, but not Shapr3D.

I’m using the Windows-based version of Shapr3D with a standard (non-touch) display and a mouse after tiring of the visual limitations of CAD generation on a 13-inch tablet. 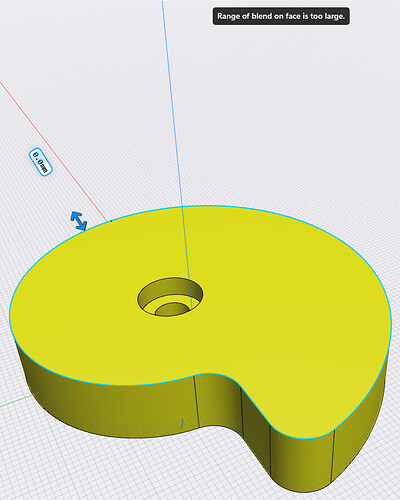 What is the size of that cam? Overall length?

As far as moving a circle from the corner of a sketch, just ‘Disconnect’ the circle and then you can easily move it with the Move-Rotate tool.

Roughly 60 mm diameter. BTW, I manually created that spiral shape (with hours of work) because Shapr3D evidently lacks a spiral generation tool (that CorelDRAW and other basic programs include).

When you use the Move-Rotate tool, don’t move the center (gizmo), use the arrows.

It’s a good solution, however I find it even easier and more safe, if the hole isn’t created in the corner, and dimensions are used, since it guarantees the circle’s position relative to the edges of the rectangle, even if the rectangle is moved:

Without audio explaining what you did and why, it is difficult to follow this video (and many other Shapr3D videos).

From what I can tell, I think you misunderstood my question. The whole point of me positioning circles (in this case) at the corners of a rectangle (again, in this case) is that I often need to precisely locate the circles relative to the corners. Beginning at the corners makes the most sense, given the limitations of Shapr3D in having limited functionality to precisely place the antecedents of objects objects (say, circles that will ultimately become holes) where I want them to be relative to other parts of the sketch components.

Now please answer my original question: why can’t Shapr3D chamfer or fillet the top edge highlighted in blue? I’ve encountered similar problems numerous times on objects of other shapes, utterly mystified why Shapr3D cannot do something so basic and so obvious reliably: chamfer/fillet works fine most of the time, but too often figuratively digs in its heels and refuses to do that, with no rhyme or reason why. So please explain why Shapr3D is so obstinate in this regard, and what could be done to circumvent that bug.

In the video, I select the midpoint of the circle, and the edge where I want to define the distance from. I set it for both sides of the rectangle, so the position is now fixed.

Without the model at hand, it’s not possible to answer your question regarding the chamfer / fillet problem. The best way is to open a support ticket at https://support.shapr3d.com/hc/en-us/requests/new with the .shapr design attached, so we can investigate. It can have many reasons, depending on how the body was created.

If I entered a support ticket every time I encounter an exasperating Shapr3D bug, I would never get any work done.

Thinking of the many other problems I’ve encountered, the only obvious common denominator is that there is a fundamental flaw in Shapr3D making it extremely finicky, needlessly. In this case, and many others like it, the object is indeed perfectly valid (I printed it with my 3-D printer last night) but Shapr3D has some bizarre fixation on an irrelevant aspect of the file preventing it from performing certain operations.

Further testing the problem last night, I found that I could chamfer the blue line if I reduced the chamfer to 0.001 mm — a ridiculously small amount, too small to be visible in a printed object.

I have previously circumvented some of those exasperating bugs by starting from scratch and re-creating the file, sometimes MANY times, until Shapr3D finally behaves normally. This is proving to be a monumental waste of time. Why not fix the underlying code?

It’s not necessarily a bug in the code, even if you experience it like one.

For example: There could be miniscure faces / edges created during the modeling process, which then make a fillet impossible. In this case, the created body itself would be perfectly valid, and you could print/manufacture it just fine.

But, it can indeed be a bug, which, without the model, is very hard to investigate / fix. Of course it’s your choice to open a ticket or not, but investigating issues without the model is hard, sometimes even impossible, and unless we can reproduce the problem, we cannot fix it.

To save time, users should be able to submit a support ticket by clicking a button on a forum post such as this one and attaching the file in question.

Here’s the Catch-22: having wasted so much time this past year trying to circumvent exasperating problems in Shapr3D, attempting to catch up, I must carefully decide if it is worthwhile to submit a support ticket to solve a problem, or if I should just put up with it and try to think of a way to get around it. Shapr3D staff could help by making it as easy as possible to submit support tickets. This suggestion is one way to do that.

You can do that directly from the app, by clicking on Contact Support in the Help menu. It redirects to the same link posted above.

Yes, but wouldn’t I need to start from scratch and describe the problem all over again?

Attempting to circumvent this bug, I exported the file, imported it into a new file, and deleted everything except the object, hence deleting all of the sketch planes. Yet the problem persists!

Furthermore, I may not have encountered this problem if Shapr3D included a spiral tool (that CorelDRAW and other lesser programs commonly include), which strikes me as a basic component every CAD program should include.

It is helpful to remember what Bill Gates said: “Your most unhappy customers are your greatest source of learning.”

One suggestion to foster that is observing not experts but users struggling to do basic things, this being one of a long list. I learned enough about Shapr3D to successfully produce some very complex objects, so I clearly mastered the required functionality. In spite of that, I am amazed by how difficult and non-intuitive some things are, as if no one at Shapr3D is an expert in usability. Greater attention to that could help you obtain more customers, and more happy customers.

In searching for help online, I found numerous Shapr3D users experiencing problems similar to mine, many stemming from bugs, glaring omissions, or needlessly cumbersome ways of doing things that persist year after year. Please forward this thread to your CEO; he needs to see it.

No need to forward anything, pretty sure he is around, as always. @Istvan

We do pretty extensive user testing and usability tests, that being said, of course, there is always room for improvements, and we are very grateful for all the constructive feedbacks, they help a lot.

I often find things that are a problem, however i have always found them to be an error on my part (moving multiple holes, and not clicking every corner……deforming the face etc….). Most “bugs” are of my making in my workflow, and aren’t bugs………im not saying Shaper3d has no bugs otherwise they wouldn’t have bug fixes on their updates, what confuses me is that you can’t chamfer or fillet the drawing you are showing because every time i run into something like that it is a workflow problem. Then i wonder how much time Shaper3d team has to spend chasing down workflow problems instead of working on improving this incredible CAD system. Maybe I don’t understand what your trying to communicate, so could you give an example of

but users struggling to do basic things, this being one of a long list

There could be miniscure faces / edges created during the modeling process, which then make a fillet impossible.

Creating the object was very easy, consisting of the center hole, a control spline to form the cam shape, and a straight line to connect the innermost to the outermost perimeter.

I extruded that, hoping to round off the upper cam edges, but Shapr3D would not comply. How could that be a workflow error on my part? It isn’t in this case, nor the many other cases in which this bug surfaced.

Tech rep @Laci_K mentioned “There could be miniscure faces / edges created during the modeling process, which then make a fillet impossible.”

Yes, but I never instructed Shapr3D to include such “miniscure faces / edges,” so if any are present, it is the fault of the program, not me. A bug, in other words.

If you like, you can upload the .shapr file here and we can poke around, try to do the operation on our devices. Just to test.

Im curious myself, i really would appreciate if Alpine would download the file……….I’ve been wanting to see a bug that’s really not a workflow issue, that is a very simple shape, and the only real way to tell if it is workflow or a bug is if we could look at it. Im sure it will be very instructive.

Please see my response posted one hour ago. Workflow issue from connecting a control spline to a straight line? Any problem there is solely the fault of Shapr3D.